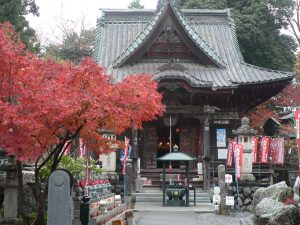 The first temple on the pilgrimage, Shimabu-ji, was built in Genroku 10 (1697) and is known for the magnificent Kannon-do Hall perfectly suited to prayer. Within the grounds is a small kiosk supplying the thin, sleeveless overgarments worn by pilgrims, woven bamboo hats, loop-shaped monk's stoles, walking sticks, books of stamps and other items used by those on a pilgrimage. 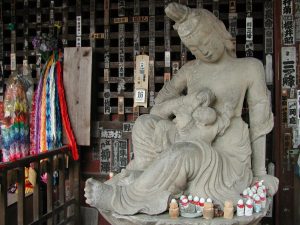 Visitors walking through the Deva gate hung with large straw sandals are greeted by neat lines of some 1,300 stone Buddhas, a Saitama prefectural designated cultural property. Among the stone Buddhas is a humorous temperance Jizo (drunkard Jizo; Jizo being the guardian deity of children) wearing a large cup on its head. And don’t miss the Edo-period Jibo (affectionate mother) Kannon (Goddess of Mercy), located in the Kannon-do Hall corridor.

The massive main temple gate, beautifully decorated Kannon-do Hall, the Yakushi-do Hall (healing Buddha hall) to its right, and images of the 13 deities said to have established the Chichibu Temples are all highlights of this temple. During the Ame Yakushi festival on July 8, the temple grounds bustle with people praying for healthy eyes.

Once part of Chichibu Shrine, this temple was established in its current form following a merger of Hahasozan Zōfuku-ji and Goyōzan Shōrin-ji temples. An offering depicting the wonder of the Goddess Kannon is located within the Meiji-era Western-style architecture of the white plaster walls of the Main Hall.

The temple’s Buddhist bell, designated an art treasure by Saitama Prefecture, is engraved with exquisite reliefs of Japan's top 100 principal objects of worship at temples. Originally, this temple was erected as the city temple of a forestry family, hence it is also known as “rin-ji” (forest temple). 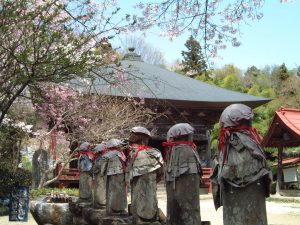 Situated beside Chichibu Muse Park, the name of this temple prompts some singers to visit and pray for a hit. The Buddhist bell used to signal the Chichibu incident in 1884 is still a strong presence.

The only temple of the Chichibu Temples in which Bato Kanzeon is enshrined. The temple backs onto an 80-meter high rocky mountain complete with rock shelter remains which indicate that Jomon people once lived in the area, giving visitors a tantalizing glimpse of ancient times. Also, the minor temple at the rear is a limestone grotto which is a treat for tourists.